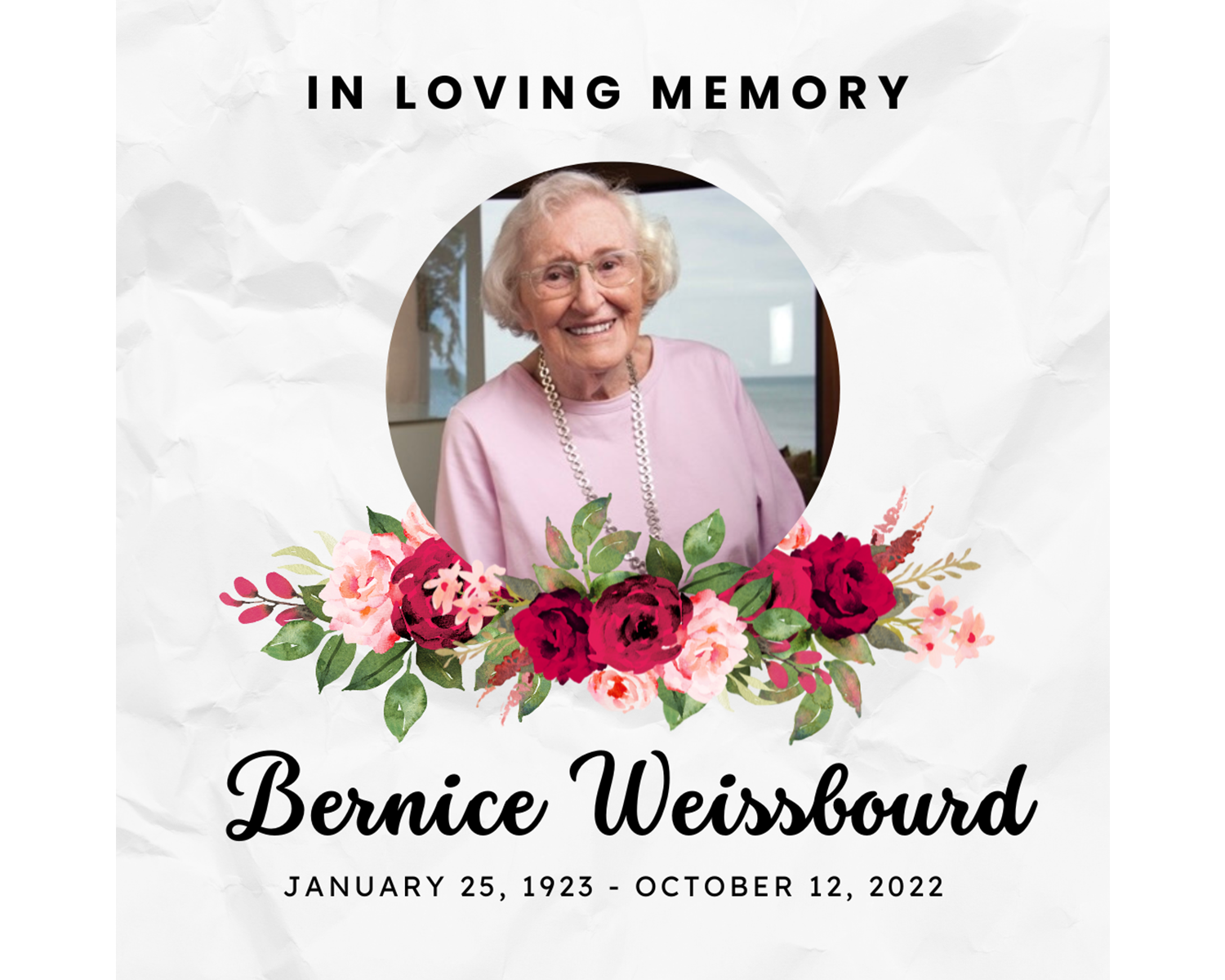 Bernice Weissbourd, 99, a researcher and advocate who built on her experience as a Head Start teacher to become a national leader in promoting the critical role of families in their children’s early childhood development, died October 12 at her home in Evanston IL. She was in the forefront of developing public understanding of what has become common knowledge: that the first three years of life are critical to a child’s development and have lifelong impact. Weissbourd went on to pioneer the idea that providing support and education for families when children are very young can make a big difference in realizing each child’s potential.

Bernice Weissbourd was born on Chicago’s south side in 1923. As a young woman, she studied classical piano at the Julliard School, and music remained a joyous part of her life.

On October 31, 1946, she married Bernard Weissbourd, a scientist, lawyer, pre-eminent real estate developer and civic leader. Lifelong loving companions, they were devoted to family, community and progressive action. They had four children and moved from Chicago’s south side to Evanston in 1959.
When her youngest child started school in 1962, Bernice began her early childhood career in earnest, becoming an early childhood teacher and program director for many years before becoming a national leader in the early child development and family support movement.

In 1976, Bernice co-founded Family Focus, a Chicago area non-profit providing community-based support for families with young children that grew to seven neighborhood service centers. Family Focus was a model for more than 20,000 programs operating today, in schools and neighborhoods around the Unites States.

In 1981, Bernice was the impetus for organizing a national meeting of state and local advocates for family support, professional and academic leaders and families themselves to share their ideas and experiences. The Family Resource Coalition (later named Family Support America) emerged from this meeting to become the national voice for family support, with Bernice serving as its President. A few years later, she was instrumental in the founding of Chicago’s Ounce of Prevention Fund, which utilized the principles of family support in its programs for teen parents.

Bernice’s national public and civic service included serving as President of the American Orthopsychiatric Association and Vice-President of the National Association for the Education of Young Children. She served as a Congressional appointee to the National Commission on Children and on the Administration for Children’s and Families’ Advisory Committee on Services for Families with Infants and Toddlers, which established Early Head Start.

She was also a prolific writer. She wrote a column on two-year olds for Parents magazine for more than 15 years and co-authored two books: America’s Family Support Programs (1987) and Putting Families First: America’s Family Support Movement and the Challenge of Change (1994). She was a lecturer at the University of Chicago, School of Service Administration from 1994 to 1999.
Family and community were not only professional preoccupations. Bernice was devoted to her family and to her extraordinary community of friends of all ages. She was known by all who knew her for her warmth and generosity, and she delighted in gathering friends and family in her home.

Coming of age during years of extraordinary economic and political turmoil, she developed a keen interest in the possibilities for progressive change which guided her many political and philanthropic engagements and stayed with her until the end of her days. Throughout her life she was committed to racial and economic justice. She left the world a little better than she found it.

Thank you for signing up! We’ll be in touch soon!

Mariana Osoria previously held the role of Vice President of Centers at Family Focus, managing both the Aurora and Nuestra Familia centers, and was the center director at Nuestra Familia for eight years, overseeing the Hermosa and Cicero centers prior to that. Previously, she was Assistant Director of Nuestra Familia at our Cicero site. Before joining Family Focus in 2006, she was a program manager for Project S.T.R.I.V.E. at Youth Guidance. With 15 years of experience in the field, Mariana has been a national trainer and facilitator for nine years. She received her A.M. from the University of Chicago’s School of Social Service Administration.

Sherneron Hilliard has held many roles at Family Focus, most recently as the vice president of programs. She served as the center director of the Lawndale center for seven years, having graduated as the project director of Adult Services for eight years, also at the Lawndale site. Prior to joining Family Focus she was an individual and family therapist for ProCare Centers. Sherneron has a B.A. from Jackson State University and a M.S.W. from Loyola University. She is currently pursuing a doctoral degree in Education Counseling Psychology.

Linda Balsamo has served in HR leadership roles at corporate and nonprofit organizations for over 25 years. Prior to her role as chief people officer at Chicago Child Care Society, Linda was the chief administration officer at NorthPointe Resources, where she helped drive organizational development and strategic change, as well as build human capital through training and development. Prior to her role at NorthPointe Resources, she worked in the Compensation & Benefits Division at Walgreen Co., managing the Employee Assistance Program and voluntary benefits for the organization of 250,000 employees. Linda is also an adjunct professor at National Louis University and currently teaches Performance Analysis & Management and Organizational Effectiveness & Development at the graduate level. Linda earned her Ph.D. in Human & Organizational Systems from Fielding Graduate University and an MBA in finance from Loyola University. She was also the recipient of the 2007 Distinguished Paper Award by the North American Management Society.

Dottie Johnson joined Family Focus as Chief Financial Officer in 2021 and oversees all aspects of its finances, information technology, and facilities management. Dottie has nearly 30 years of experience in financial leadership roles in the nonprofit sector. Previously, she served as the CFO and controller for Chicago Commons, where she was responsible for all facets of the financial strategy, planning, management, and accounting. Prior to her time at Chicago Commons, she has held varying financial leadership positions in the nonprofit sector, providing strategic direction to leadership teams on financial sustainability, overseeing investments and liquidity, financial risk assessment, and resource allocation decisions. In addition, Dottie is a published author in trade journals, developed an accredited training curriculum for senior leadership on nonprofit financial management, and has traveled around the country as a trainer and consultant. She is a certified public accountant and holds a bachelor of science degree in business from Murray State University. Dottie enjoys giving back to her community and does so through her service as a trustee of her church’s finance board and director of the children’s nursery.

Dara Munson, formerly CEO of Chicago Child Care Society since 2016, is a native of Detroit and past president and CEO of Big Brothers Big Sisters of Metro Detroit, past COO of Girl Scouts of Southeastern Michigan, and past senior director of United Way of Southeastern Michigan. Munson’s early career and education were in criminal justice, and she now serves as chair of the board of trustees of the Eastern Michigan University Foundation Board (her alma mater). Munson also serves Chicagoland in several leadership positions including chair of Chicago Alliance for Collaborative Effort (CACE), board member and vice chair of membership for the International Women’s Forum (IWF)-Chicago Chapter. She is a member of the Chicago Cook Workforce Partnership Youth Committee, Illinois Partners for Human Services board of directors, and the Southside Giving Circle for the Chicago Foundation for Women. She is a member of Alpha Kappa Alpha Sorority Inc. and The Links, Inc.